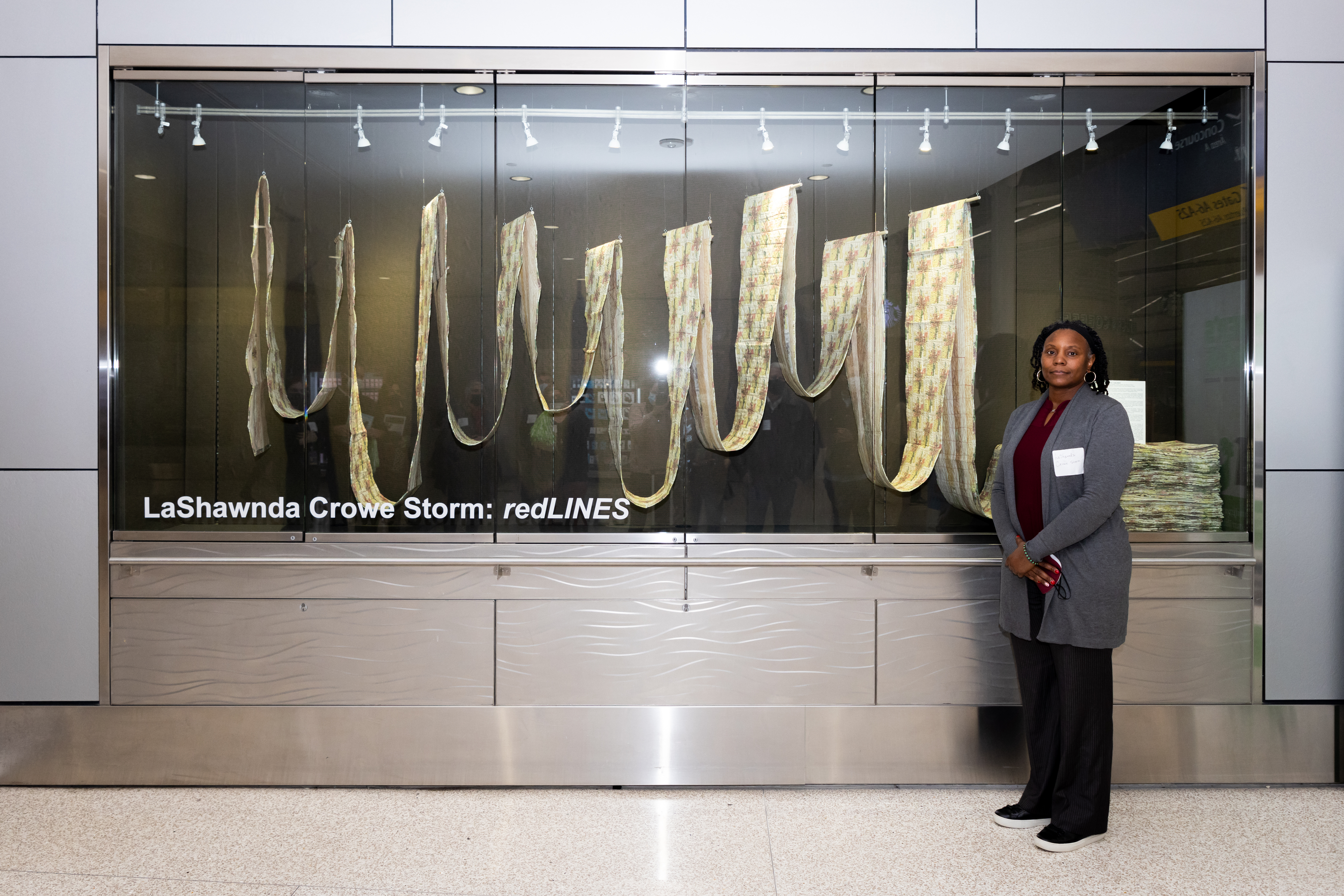 redLINES is a 426-foot pieced and quilted table runner that supported At the Crossroads, a food justice project and community-based collaboration between artist Seitu Jones and the Indianapolis Museum of Art at Newfields that took place in September 2019.

The overall project examined food justice issues in Indianapolis, specifically, Westside communities. As a companion piece, redLINES examines the historical impact of policies that perpetuated economic and racial injustice – the root cause of why so many still continue to struggle with food insecurity and inadequate food choices even in the midst of the city’s new home building and rapid community change.

Nationally, redlining was the systematic denial by government and businesses of services to communities in specific geographies. Redlining was most pronounced in real estate and lending, where some neighborhoods were literally marked on the map with a red line indicating that they were too risky to receive loans and investments. Race was a central factor: the blacker, browner or poorer the community, the redder its map.

Injustice begins in the home, the heart, the belief that others are not worthy. Today, we find that redlining, when coupled with other policies rooted in racialization (such as building highways and segregating schools) resulted in years of disinvestment and dislocation. Our current reality is built on the ripple effect of past decisions.

redLINES asks us to consider the historical harm, its current impact, and what decades of disinvestment now mean for those in Indianapolis who suddenly find themselves in the midst of rapid reinvestment. What makes us angry or “see red” about these histories, about these realities? Where do we draw the line in the sand of injustice? How do we redraw the map for a more equitable and racially just future? Or is that even possible?

About the Artist: LaShawnda Crowe Storm received her MFA from the Art Institute of Chicago in 2004. She has exhibited widely in both traditional and alternative spaces, as well as won numerous awards for art and community service. Her work continues to be impacted by social justice concerns, both historically and currently. “For me, art is my form of ‘social work’ and I use it to open doorways to community dialog, which is the first step to healing. This, in itself, leads to wider social change.” Exploring topics such as suicide, misogyny, lynching and slavery, she explores the ramifications of these issues on a broader socio-historical scale, as well as incorporates community-based aspects, traditional African spiritual practices and black American folklore into her projects.