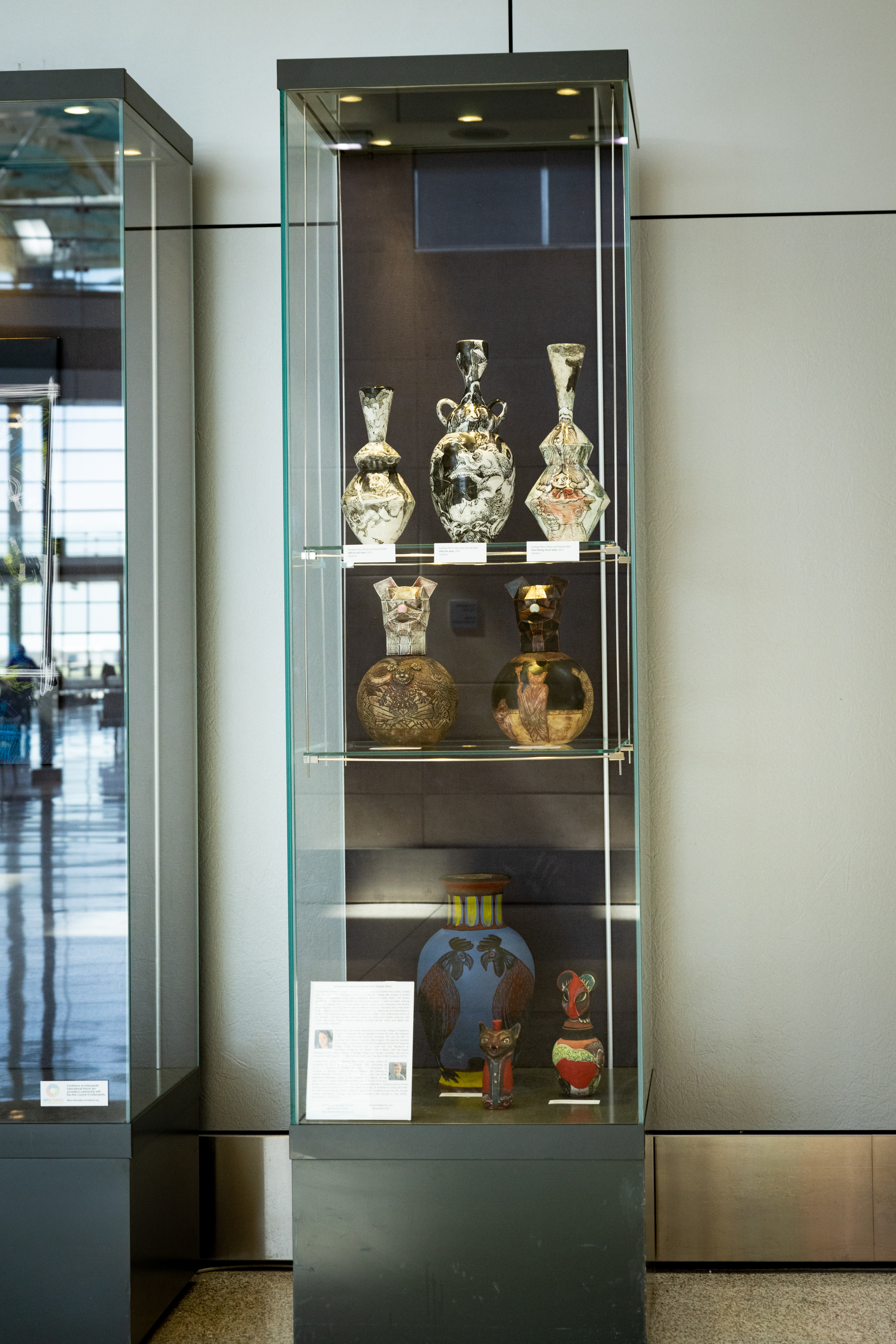 This exhibition features ceramic artworks by Rachel Bleil and Andrew Perry Davis, created both individually and collaboratively. Bleil decorates her vessels with scenes of growth, change, and adaptation using hybrid characters resembling teddy bears. The carved, sgraffito (scratched) lines evoke feelings using subtle variation in width and depth, defining forms, and leaving behind a tactile surface texture. Davis sculpts characters both familiar and ambiguous, recycling them to explore different meanings. Elements that at first seem to be contradictory prompt the viewer to play with their references and interpretations. Artifacts or antique toys inspire many of the forms he makes. Their collaborative work is a play between form and surface. Rachel creates the forms and Andrew responds with surface decoration. These artworks playfully combine familiar myths and fables with unique animal characters.

Rachel Bleil discovered ceramics at Community College of Allegheny County in Pittsburgh, PA, and decided to follow her bliss. She received a BFA in ceramics from Edinboro University (PA) and her MFA in ceramics from Indiana University, Bloomington. She was the recipient of the Roger Long Award for Student Excellence at NCECA’s Regional Student Juried Exhibition and a Juried Kiln God Residency at Watershed Center for the Ceramic Arts in Maine. She has taught ceramics at IUPUI Herron School of Art and Design and Purdue University. Her work is published in 500 Cups (2004), 500 Pitchers (2006), and The Best of 500 Ceramics (2012).

Andrew Perry Davis is originally from South Carolina, where he completed his B.F.A. at Winthrop University. After completing his M.F.A. in Ceramics at the Edinboro University of Pennsylvania, he relocated to Michigan where he taught ceramics and drawing at Central Michigan University. In 2008, he was a juried nine-month resident at Watershed Center for the Ceramic Arts in Maine. He has been the ceramics program technician at IUPUI Herron School of Art and Design in Indianapolis since 2011. His work has been featured in numerous group shows including Materials Mastery at Fort Hays State University, an exhibition in conjunction with the 49th Annual Kansas Artists Craftsmen Association Conference; and the 4th Annual Lilstreet International, Chicago. His work is published in 500 Animals in Clay (2006), and Humor in Craft (2012).